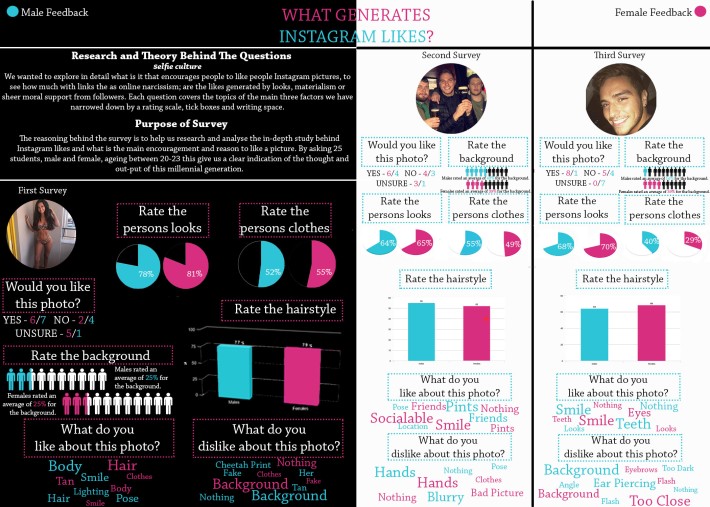 “That like button is getting hit 4.2 billion times a day, which means that the average user is going through their feed and pressing that button more than once on a daily  basis.”

Instagram is one of the most popular of social media sites with preteens. Where some other once popular social media platforms have faded from favor, Instagram seems to be picking up steam and gaining popularity. Owned by Facebook, Instagram is a free app that allows users to take, edit, enhance, and post pictures instantaneously, and allows others to like and “follow” the user.

Why did we undertake this research?

Myself and Niamh designed this poster to visually showcase the results from the survey we got people to complete in class which I spoke about in an earlier post. We decided to undertake the research on Instagram likes as it is a huge part of our generation now and a part of our every day lives. Instagram is something we are both very familiar with and we wanted to explore the deeper reasoning behind why ourselves and others like pictures.

One of our readings from MED518 was a paper written by Derek Conrad Murray which “explores the cultural fascination with social media forms of self-portraiture,
commonly known as “selfies,” with a specific interest in the self-imaging strategies
of young women in their teens and early 20s.” This paper inspired our idea for our research.

What did we do in class?

We gave out three different surveys, each with a different image on them. The first survey included an image of a girl who gets quite a lot of likes on Instagram so we used one of her most popular images so we could identify what people really liked and disliked about the images and likewise with the other two surveys. We used the same male in the other two surveys however we used a picture that didn’t have many likes as opposed to the other which had the most likes.

In total, there were 25 surveys filled out in class and we then took it upon ourselves to calculate the results of them. We had quite a mix of answers when we asked if they would like the photos we had shown them, however the males and females answered quite similarly when asked to ‘rate’ the persons clothes, looks, hairstyle and the background of the image, which can be seen in the poster as bar and pie charts. We also found that both males and females rated the girls looks and clothes higher than both of the boys pictures.

What more could we have done if there weren’t limitations?

We were limited to a maximum of 15 minutes per group therefore there were limitations. If there had have been more time given to this project we could have expanded our surveys to get more information. Another idea which I think would have been beneficial and interesting would have been to get everyone in the room who has an Instagram account to each take out their smart phone, go onto the app and see the last five images they had liked to see how many of them were seflies.

I also think people may have had discussions about answers at their tables as some of the surveys we got back were quite similar and people may not have wanted to be honest, therefore I think if we had more time we could have interviewed people to see what they really thought of the images without being influenced by their friends.

Instagram has both pros and cons, personally I am a fan of Instagram, however I am aware of the dangers that come along with it.

Design of our poster

We used pink, blue, white and black as our colour scheme as we were analysing the results taken from males and females. We used a key at the top of our survey which shows the audience that the answers in blue where the feedback from males and the pink was from the females.

Overall I am pleased with the findings of our surveys and the outcome of the poster design. The range of answers in the surveys helped us to identify that people have many different opinions on the one picture. There was also a statistic in 2016 which showed that “Female Instagram Users Get 5x More Likes Than Men” which we can also find from our surveys that shows the female got higher ratings than the male pictures. If we had of had more time to carry out the Active Research Inquiry activity I believe we could have got a much deeper analysis.